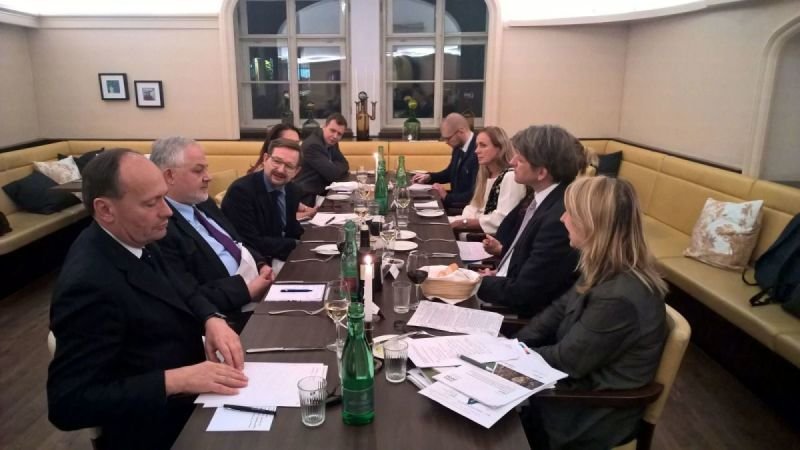 Representatives of five organisations participating in the Brussels Dialogue on Climate Change (BDCD) were invited to an informal meeting of the Vienna Security Salon on 30 November 2018. The theme of the meeting, organised by the Friedrich-Ebert-Stiftung Regional Office for Co-operation and Peace in Europe in co-operation with the OSCE Secretary General Thomas Greminger was “Climate and Security: An Issue for the OSCE?”

These Vienna meetings provide an opportunity for diplomats, policy-makers and experts from across the OSCE space to meet informally in Vienna to discuss possible solutions to security challenges in all three dimensions of the OSCE’s comprehensive approach to security: politico-military, economic and environmental, and human aspects. The aim is to discuss informally common approaches to tackling shared challenges, reducing tensions and preventing or solving conflicts. It offers a platform for new ideas to be explored and tested among curious and engaged participants.

Participants were briefed on the recent concluded OSCE project “Climate Change and Security in Eastern Europe, Central Asia and the Southern Caucasus” (2013 – 2017), which was funded by the European Commission and the Austrian Development Agency and implemented together with UNEP, UNDP, UNECE and REC.

Through the project, participatory assessments of climate change and security risks were conducted in three regions, resulting in the identification of the most vulnerable geographic areas (climate change and security hot-spots) and the development of recommendations addressing the identified risks. Furthermore, a Transboundary Climate Change Adaptation Strategy and its Implementation Plan were developed for the Dniester Basin, and support was given to selected climate change adaptation measures.

Participants were then invited to provide advice on the plans for a follow-up project which will focus on four regions: South Eastern Europe, Eastern Europe, South Caucasus and Central Asia.

The project’s beneficiaries are policy-makers and government representatives, as well as Aarhus Centres and NGOs. A special focus will be also given to Parliamentarians, journalists and civil society representatives as multipliers for awareness-raising.

The overall objectives is to foster co-operative responses to climate change related security threats in the four regions through implementation of security-relevant adaptation measures in selected vulnerable geographic areas as well as through developing capacities and sharing knowledge within and among the regions.