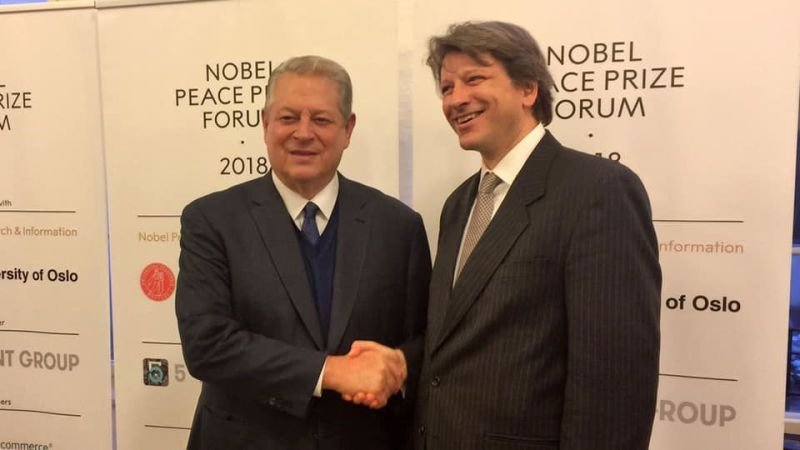 While negotiators worked to achieve a successful global climate agreement in Katowice, Poland in December, other climate experts convened in Oslo at the Nobel Peace Prize Forum 2018 where the theme of this year’s meeting was "How to Solve the Climate Crisis?" The keynote speaker was Former U.S. Vice-President and 2007 Nobel Peace Prize Laureate Al Gore. The event organised by the Norwegian Nobel Institute, the Nobel Peace Prize Research & Information AS and University of Oslo was held on 11 December 2018.

To watch the whole event go to: https://www.youtube.com/watch?v=4e41DIpjYZQ

Alexander Verbeek, Founder of the Planetary Security Initiative in The Hague, Policy Director of the Environment & Development Resource Centre (EDRC) and Co-coordinator of the Brussels Dialogue on Climate Diplomacy (BDCD) took part in the event and was a speaker at the related High-Level Expert Climate Congress on 12 December which was entitled “Solving the Climate Crisis in Time: From Climate Destabilization to Climate Security”.

He spoke in the opening panel on “Climate Peace and Security: Climate Change as a Threat Multiplier” along with Gary Lewis, Director, Policy and Programme Division, UN Environment and Tuija Talvitie, Executive Director, Crisis Management Initiative.

The 12 December event brought together a congress of select experts to further discuss the consequences of climate disruption, including conflicts over natural resources, human and arms trafficking and the need for collaborative action from governments, businesses, industry and communities, at all levels, to solve the climate crisis in time as matter of international peace and security.