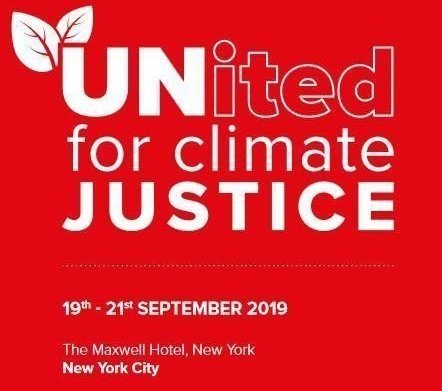 The Foundation for European Progressive Studies (FEPS) and its partners (including EDRC) organised a three-day side event at the UN Climate Summit in New York from 19 to 21 September 2019.

The event entitled UNited for Climate Justice was preceded by two preparatory meetings of the project steering committee in Madrid on 10-11 April and in Brussels on 24-25 June.  The steering committee was chaired by Teresa Ribera, Minister for the Ecological Transition in Spain and included expert policy advisers, political representatives, civil society activists, academics and other key stakeholders in the climate justice debate.

FEPS has described the United for Climate Justice initiative by saying that “The concept of climate justice frames climate change as a political and ethical issue. It recognises that environmental injustice stems from social and economic injustices within our societies. The fact that it is the most fragile and vulnerable; the most marginalised and disadvantaged who are affected most by climate change and the least able to deal with its consequences. Furthermore it considers climate change is further exacerbating already existing inequalities. The idea is to consider the fairness of this often disproportionate impact of climate change on different sectors of our societies in both developed and developing parts of the world. It acknowledges that sustainable choices are not accessible to all equally”.

Focus of the initiative: The substance of this initiative aims to bring about fresh-thinking into the core of this debate. The fundamental objective is to create a sound narrative of raising notably political ambition on climate action. The approach should be holistic and global-orientated with key policy proposals and guidelines as the output. It should be above-all, forward-looking. Yet it also needs to answer to the urgency of the current situation. Viable policies and alternatives should be brought forward and tested.

Full details of the proposals and underlying reasoning are available in the UNited for Climate Justice - Declaration with guiding proposals for Progressive Climate Action authored by C. Billingham, FEPS Senior Policy Advisor also includes the list of the members of the steering committee.

The Executive Summary by Stephen Minas includes a summary of the five guiding proposals.

The full UNited for Climate Justice Policy Paper was presented ahead of the UN Climate Action Summit New York on 23 September 2019.

The programme for the main event in New York included a keynote speech by Mary  Robinson, former President of Ireland, President of the Mary Robinson Foundation, Chair of the Elders and many other distinguished speakers from around the world.

The September 2019 event was the second side event of FEPS in the framework of the UN General Assembly. It has become an annual imitative under the support of UN Secretary General A. Guterres.

THE CLIMATE AND BIODIVERSITY NEXUS: INTERDEPENDENT CHALLENGES AND RESPONSES
New Strategies for Climate and Security
Sustainable Peace & Security in a Changing Climate: Recommendations for NATO 2030