Back to the Future

By Ronald A. Kingham

While the 2015 Paris climate conference is hailed as a landmark event, it is worth remembering another important Paris conference from 30 years ago this week which was “Roots of the Future: A Global NGO Conference in relation to the 1992 Earth Summit” held in Paris, 17-20 December 1991.

As drafting coordinator and editor of the final document - “Agenda Ya Wananchi: Citizens’ Action Plan for the 1990s” - I find it interesting to look back at what we were saying then and how much – or how little - has changed since.

The Agenda Ya Wananchi (Swahili for “Agenda for Citizens”) contained 13 articles under “Our Own Commitments” and 21 articles under “An Appeal to Governments” including calling for action to reduce greenhouse gas emissions. Reference was made to the first IPCC report of 1990 saying that we could expect an increase in the average global temperature of between 1.5 and 4.5 degrees by the end of the 21st century and to predictions of the impact of climate change with which we are now all too familiar. As we said back then, global warming … “could in fact lead to a general destabilisation of climate which would affect all human activities”.

The Agenda called on governments to commit to fully stop the production of CFCs rather than phasing them out over a ten year period as agreed under the Montreal protocol; undertake a crash programme to reduce all CO2 emissions by 75% by the year 2030; reduce methane and nitrogen oxide emissions particularly with regard to natural gas and oil industry leakages and coal mining; and to employ state-of-the-art energy conservation technology and renewable energy including supporting development of public transport, alternative fuels and electric / solar automobiles, and state-of-the-art building design. The Agenda concluded with a list of reasons why measures for fighting global warming are necessary for 10 other reasons as well - including as a contribution to the protection of many species in comprehensive and ecological biodiversity.

The document also called upon all governments to take part in technology transfer, recognition of traditional knowledge and non-polluting use of energy and materials, taxation of fossil energy, compensation to less polluting countries for damages caused by more polluting ones, and “cradle to grave” energy accounting regarding energy production, transportation, fuel burning, storage of wastes, etc.

Roots of the Future

More than 1,200 NGO representatives from 150 countries took part in the 1991 Roots of the Future Conference which was opened by French President, François Mitterrand. The conference was proceeded by a year of preparatory meetings by the organisers and drafting committee as well as many national and regional NGO consultations from around the world in preparation for the 1992 Earth Summit. Many of the meeting reports, declarations, manifestos, statements, and position papers from those events were included in the ca. 1000-page “Roots of the Future: Compendium of Citizens Movements Responses to Environment and Development Challenges”.

The 1991 Roots of the Future Conference which was held in the Parc de la Villette at the Cite des Sciences et de l’Industrie the largest science museum in Europe that has seen well over 70 million visitors since it first opened in 1986. Photo: Zairon, Licensed under the Creative Commons Attribution-Share Alike 4.0 International

The second of the three global NGO documents was “Justice Between Peoples – Justice Between Generations” which aimed to bring together the essence of the NGO approach and to emphasize how people and communities are working to regain control over their own resources and to determine the fates of their own environment and development. The synthesis report which also contained the first draft of Agenda Ya Wananchi was the main background paper for the 4-day Paris conference during which 15 working groups – each with three sub-groups working in English, French and Spanish - reported daily to our drafting committee to produce the final document which was circulated at the June 1992 UN Conference on Environment and Development – UNCED. [1] Many ideas contained in Agenda Ya Wananchi also formed the basis for a number of the NGO Alternative Treaties negotiated in Rio at the time of UNCED.

Unlike the intergovernmental Agenda 21 adopted at the Earth Summit – which is a comprehensive plan of action to be taken globally, nationally, and locally by organizations of the United Nations System, Governments, and Major Groups in every area of human impacts on the environment,the overall emphasis of Agenda Ya Wananchi was on moving towards “a more socially just and environmentally secure world” first of all through the commitments by citizens and communities and secondarily by actions that needed to be taken by governments.

Where Agenda 21 emphasized development and prosperity, Agenda Ya Wananchi gave prominence to protecting cultural diversity, self-determination and restructuring society. Yet both documents share several fundamental principles such as the need for citizens to take a greater role in decision-making and that a global partnership is necessary to achieve environmental-related change

Comparing the situation then with now, the IPCC prediction of 1.5 – 4.5 C temperature increase still stands. So we knew all we needed to know already 30 years ago. And imagine if the world would have taken action then. It would have been so much easier and cheaper than it is now, and without all the devastation that climate change is causing right now.

Compared to 30 years ago, we can now see the impact of climate change all around us, more people are aware, and the media is no longer representing 'two views' on climate science. But also we have ruined the planet in 30 years as we see with the melting ice-shields, loss of biodiversity, etc. 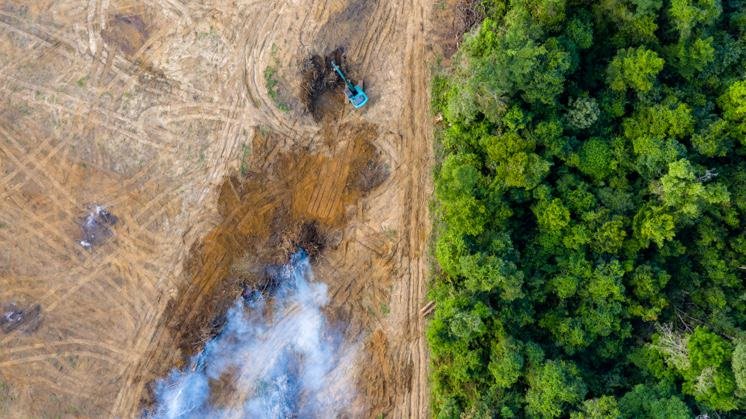 The planet's biodiversity is under threat and the main culprit is the one who, paradoxically, depend on it most: the human being. Slowing down biodiversity loss, understood as the reduction or disappearance of the variety of living beings that inhabit the planet, is one of humanity's great challenges. Source: Biodiversity loss, a risk for the environment and for humanity, IBERDROLA. https://www.iberdrola.com/sustainability/biodiversity-loss

Agenda Ya Wananchi called upon all government to integrate ecological considerations into economic planning and management of natural resources, with mandatory comprehensive environmental impact studies of all development proposals, full public participation in decision-making, and special care for maintenance of fragile ecosystems and respect for traditional land management systems.

While there has been progress in some areas, the loss of biodiversity remains as an increasingly serious threat with only 23% of the earth now being considered "Wilderness." [2] That is according to a 2016 study [3] in which it was reported that about a tenth of the Earth’s wilderness has been lost since the 1990s. Over the last 20 years, a total area half the size of the Amazon and twice the size of Alaska has been depleted. In 2020, biodiversity loss was ranked 3rd among the top 5 global risks in terms of likelihood and in terms of impact. [4] 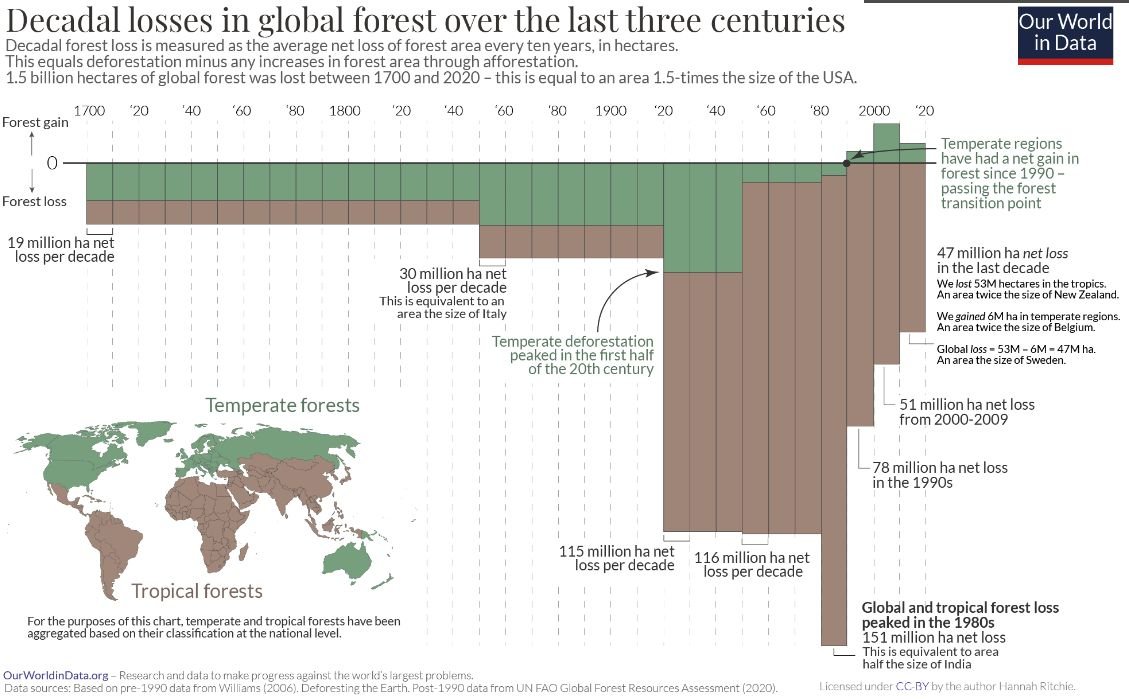 Deforestation in temperate regions peaked in the first half of the 20th century and there has been a net gain in forest in temperate regions since 1990. However, for tropical forests there has been a net loss of 176 million ha since 1990. Source: Hannah Ritchie and Max Roser, “Habitat Loss”. Published online at OurWorldInData.org. 2021. https://ourworldindata.org/habitat-loss

While all forests have climate-cooling superpowers, tropical forests trap larger amounts of carbon dioxide and evaporate more water. In doing so, they produce that thick (and beautifully dramatic) cloud cover that reflects sunlight back to space. Reporting on a 2007 study in the Proceedings of the National Academy of Sciences the Rainforest Alliance informs us that deforestation in the tropics is far more devastating to the Earth’s climate than deforestation in higher latitudes. Which is just one reason the Rainforest Alliance has been fighting deforestation in the tropics for more than 30 years, by innovating and promoting sustainable farming methods and responsible forest management adding that saving and restoring forests—especially tropical forests—are essential to warding off the worst effects of global warming. [5]

Also, compared to 1991, on the positive side we now have the worldwide mobilisation of youth, more knowledge, more investment, and new advances in research in green technology. And the governments of the world are inching toward more effective climate action as we saw at the recent Glasgow climate conference.

While still not enough has been done to slow global warming or reduce biodiversity loss in the last 30 years since the Roots of the Future conference in Paris, I nevertheless remain optimistic about the next 10 to 30 years. And that is largely because of a continuing faith in the power of citizens not only in continuing to commit to act themselves but also by holding governments and businesses accountable.

With us on the drafting committee was the Argentine ecologist and poet, Miguel Grinberg, who began the preface to Agenda Ya Wananchi with these hopeful words:

“Suddenly, it is like the birth of a new earth.

People from across our planet are becoming the caretakers of their own destiny, building an expansive web of solidarity and social invention. …

Their shared certainties go further than the most desirable revolution and are stronger than all the summits.

Such irreversible commitments bind together the visionary and the victim, the strong and the weak, the loved and the lonely.

Each of us is looking for a place in such collective re-creation. Many tools are at hand …

Only self-determination is urgently required.

Beyond words and shadows.

In the name of a growing planetary celebration.”

The drafting of “Agenda Ya Wananchi: Citizens’ Action Plan for the 1990s” was coordinated by the Environment & Development Resource Centre (EDRC) and was published in February 1992 by the Environment Liaison Centre International (ELCI) in English, French and Spanish and later also in Arabic and Portuguese. 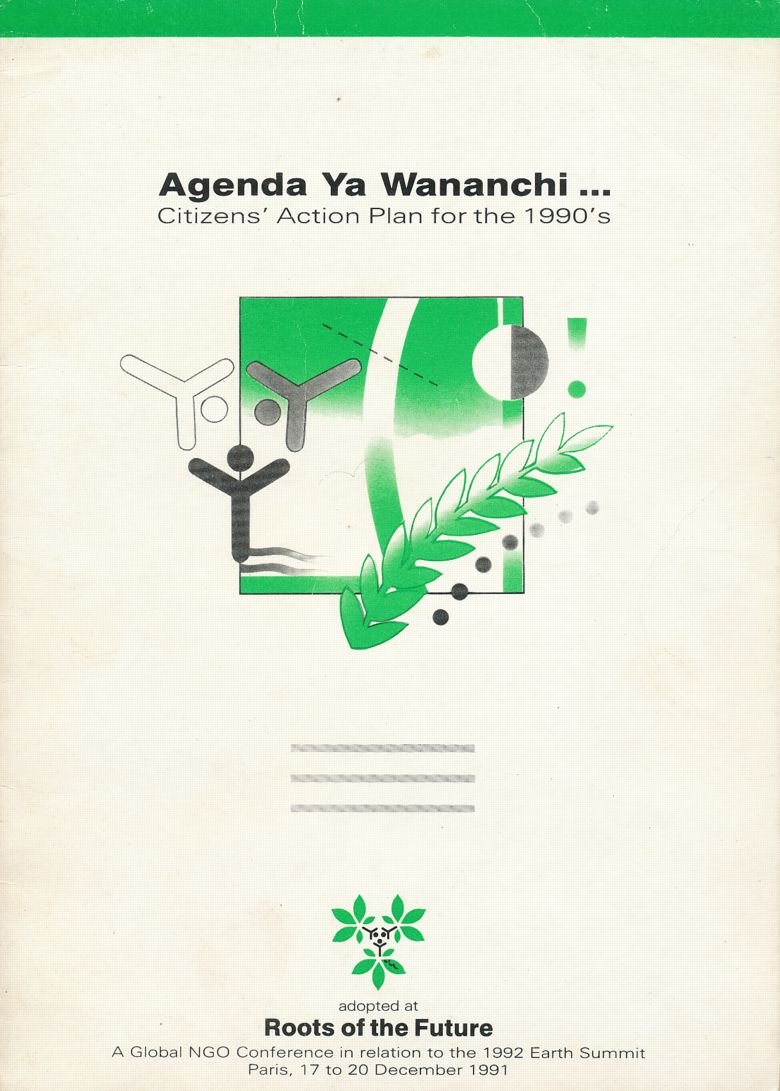 [2] Yasmin Tayag, “Only 23% of the Earth Can Be Considered ‘Wilderness,’ Warns Biologist”, INVERSE, 31 October 2018 https://www.inverse.com/article/50378-there-is-almost-no-wilderness-left-on-earth