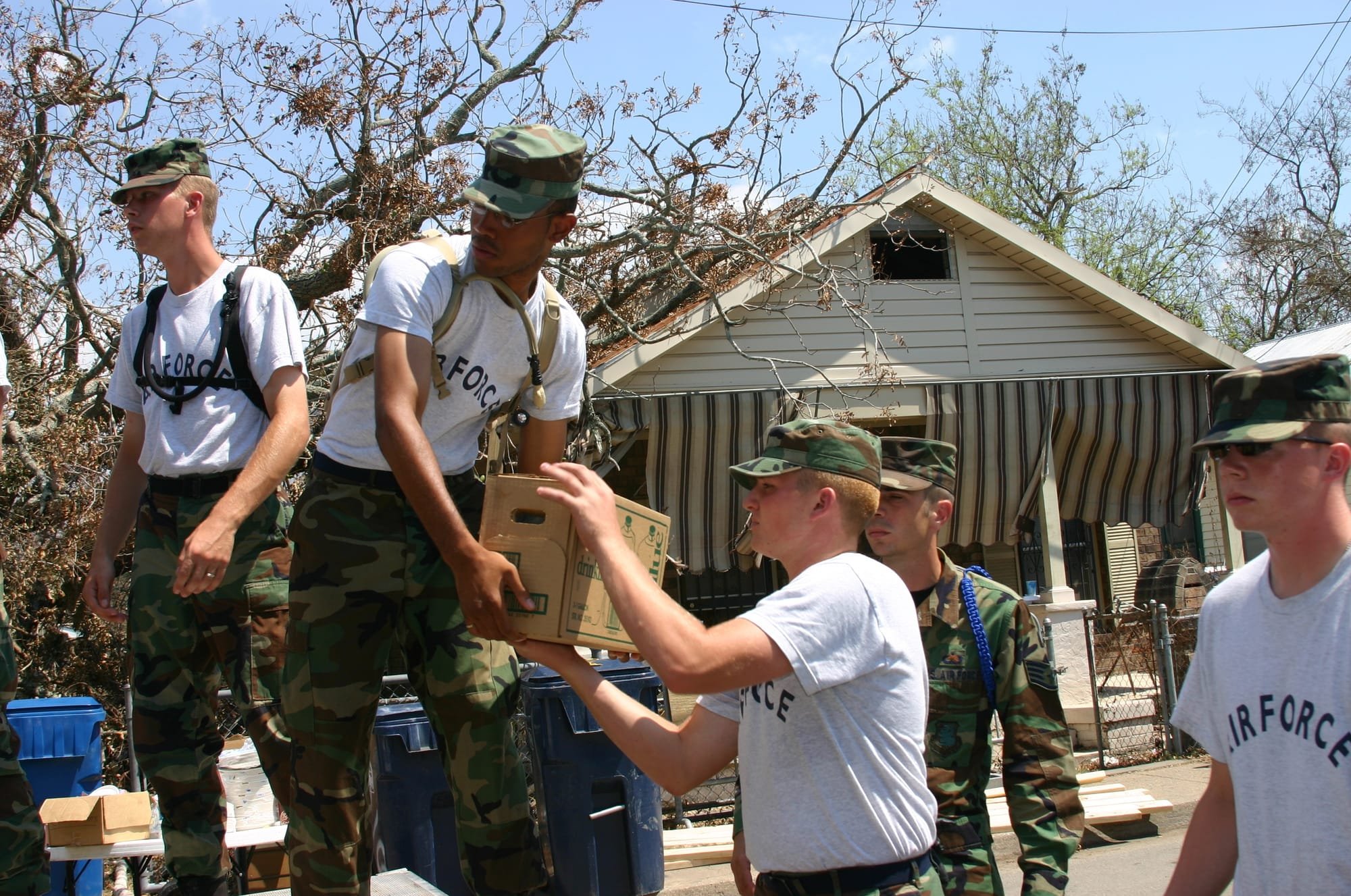 National, regional and international security have been dramatically redefined in recent decades to include non-traditional threats such as terrorism, cyber warfare, transnational organised crime, human trafficking, and now also global pandemics. Among these and other threats to our security and well being “the one that poses the greatest challenges over an extended period is the consequences of a changing climate” according to Rear Admiral RN (Ret.) Neil Morisetti, Vice Dean, Public Policy, Faculty of Engineering Sciences at the University College London and member of the  Global Military Advisory Council on Climate Change (GMACCC).

Admiral Morisetti warned about the consequences in his presentation during an on-line conference addressing the question of what ought to be NATO’s role in addressing climate security challenges. The event was the 12th meeting of the informal Brussels Dialogue on Climate Diplomacy (BDCD) co-organized by the Environment & Development Resource Centre (EDRC) on 17 September 2020 and hosted by the Policy Planning Unit in the Office of the NATO Secretary-General.

Climate change as a threat to security

Recognizing climate change as a new transboundary, non-traditional threat Admiral Morisetti expressed “a degree of frustration with the lack of progress in acknowledging and understanding how a changing climate will impact geopolitics and the security environment” adding that, “in one sense this is understandable given the pace of activity and the lack of capacity to absorb more. But, at the same time, there is increasing and compelling evidence of why we need to act.”

In addition to the well-known traditional threats to security, “we are seeing an increase in non-traditional threats to our prosperity and wellbeing” and these are “frequently transboundary in nature and without any military origin”, he said. The security implications of climate change are evident “especially where it impacts on the availability of key natural resources – food, water, and land.”

While not the primary cause of conflict, climate change plays an increasing role in amplifying regional and global tensions. As Admiral Morisetti put it, “Whilst the general consensus today is that physical changes alone - either as a result of the onset of long term trends or due to extreme weather events - are unlikely to be the direct cause of conflict, the second and third order consequences, loss of land or livelihood, have already contributed to increased instability and risk of conflict.”

Enumerating several examples of regional tensions and examples of the economic impact of climate related events in Member States, he said that climate change “is going to affect all of us and potentially will alter the balance of power globally” adding that “Today climate change is seen as a threat multiplier; in the future it will be potentially seen as causing a geopolitical tipping point”.In outlining what NATO could do in his presentation, he concluded that “There may be no security solution to climate change but there is most definitely a greater risk of instability if we do not act, and that includes the military”.

Enumerating several examples of regional tensions and examples of the economic impact of climate related events in Member States, he said that climate change “is going to affect all of us and potentially will alter the balance of power globally” adding that “Today climate change is seen as a threat multiplier; in the future it will be potentially seen as causing a geopolitical tipping point”.

In outlining what NATO could do, he concluded that “There may be no security solution to climate change but there is most definitely a greater risk of instability if we do not act, and that includes the military.”

While NATO has long been concerned about the relationship between environment and security, other experts added further reasons for why and how NATO should address climate change urgently.

The global community is facing the “borderless challenges posed by climate change“ according to Alice Hill, David M. Rubenstein Senior Fellow for Energy and the Environment at the Council of Foreign Relations. Not only civilians but military operations across the globe are being harmed by extreme weather events affecting regional tensions and peace operations. In her presentation, she said that “The NATO alliance is crucial to guaranteeing the joint security of its members, as well as the international community at-large.”

Dr Malin Mobjörk, Programme Director of the Stockholm International Peace Research Institute (SIPRI) echoing Admiral Morisetti’s concerns in her remarks, said that “the approach to security must appreciate multidimensionality to achieve a “comprehensive security“ approach, interlinking "human, communal, territorial, and international security.“ She stressed that “climate change is impacting both the cause and the dynamics of conflict, which need to be assessed in a context-specific manner. … A holistic risk understanding will enable the development of effective strategies and actions by military organizations.”

Further, pre-emptive action and fixing the carbon cycle by protection, regeneration, and nurturing the ecosystem must be given priority according to Olivia Lazard, an environmental peace-making expert who is a Visiting Researcher at Carnegie Europe and a policy advisor for EDRC.

In her presentation, Ms Lazard stressed that “Protection and regeneration of ecosystems is needed in order to reverse global warming over time and to adapt quickly and effectively to climate-related disasters that are already locked into the system as a result of past emissions and continuous breaking of ecological interdependencies at all levels. In short, NATO needs to now evolve its security and mandate framing to include ecosystems-based approaches, ranging from analysis to repurposing some of its civilian and military capabilities, to contributing to institutionalisation of ecosystems-based actions” adding that “A functioning and healthy ecosystem is a central feature of peacebuilding.”

She concluded by saying “If NATO fails to adapt to the meta challenge of climate change, and fails to comprehend holistically the drivers of climate change and tackle them, it will eventually drive itself into obsolescence as security and climate-related shocks increase in time and impact exponentially over the coming two decades.”

Key peace and security challenges of the 21st century

Dr Radostina Primova, Senior Analyst, Economic Program, Center for the Study of Democracy in Sofia further elaborated on the need for a nature-based solution to combat climate change such as striving towards democratic and transparent society as opposed to solely technological solutions which may negatively impact the ecosystem, harming both humans and biodiversity.

In her presentation she said that “The degradation of the natural environment and exacerbating competition over natural resources along with the population growth are perceived as the key peace and security challenges of 21st century. The awareness about the increasing role of ecosystems in the new security paradigm would imply also going beyond the traditionally perceived concepts of security and military response and factoring in the environmental aspects in crisis management and resilience building.”

Speaking specifically on Energy Transition and the Defence Sector, she said that “Although most Member States have committed to the long-term carbon neutrality goal by 2050, they are divided on the specific policy measures and pathways on how to achieve this deep decarbonizations of our economies.”

“The energy transition will be also impacted by the digital transformation and its impact on critical electricity infrastructure”, she said. She added that “There is a digital transformation underway in Energy and Environment (E&E) critical infrastructure that creates vulnerabilities. As a result of the variable Renewable Energy Systems (RES) supply, there are more opportunities to disrupt the electricity system. For instance, electric utilities in Eastern Europe alone have reported a 400 percent increase in cyber-attacks since the start of the COVID-19 pandemic. The consequences of such attacks could result in financial losses and even have an impact on human lives”.

Another issue raised by Dr Primova is related to geoengineering. She stated that “The IPCC report already includes negative emissions technologies in its scenarios and solutions for reaching the 1.5-degree objective”. She explained that some experts claim that nature-based solutions alone will not be enough. She warned that “geoengineering like solar irradiation, but also Bioenergy with Carbon Capture and Storage (BECCS) could actually have not only serious environmental, social and human rights impacts but also very serious planetary and security implications in the future depending on who controls these kinds of technologies”. She concluded that while “geoengineering, the large-scale manipulation of the Earth’s natural systems and the climate, is being offered as a solution to limiting global warming and suppressing the impacts of climate change, geoengineering means large-scale interventions in our global ecosystems, with potentially catastrophic consequences for humans and biodiversity.”